What is Automatic Visa Revalidation?

Most foreign nationals entering the United States on a temporary basis as nonimmigrants are required to first obtain a visa at a U.S. consular post abroad. A visa grants its holder permission to apply for admission to the United States. The visa does not guarantee admission, however. 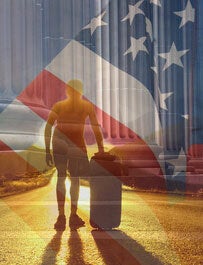 Most foreign nationals entering the United States on a temporary basis as nonimmigrants are required to first obtain a visa at a U.S. consular post abroad. A visa grants its holder permission to apply for admission to the United States. The visa does not guarantee admission, however. All nonimmigrants remain subject to inspection and admission by U.S. Customs and Border Protection (the guys in blue uniforms) at the port of entry.

There are some exceptions to the visa requirement. The biggest exception is that Canadian citizens are visa-exempt in all nonimmigrant classifications except for K and E. The second major exception is the Visa Waiver Program, which permits nationals of certain countries to enter the U.S. without a visa for up to 90 days as visitors. There are other, more limited exceptions, such as those who qualify for humanitarian parole.

While a visa must be valid at the time of entry to the United States, it need not remain valid for the duration of the foreign national's stay in the United States. The person's period of authorized stay is governed, instead by his I-94 Arrival/Departure Record. So long as a foreign national's I-94 remains valid and he otherwise abides by the terms of his nonimmigrant classification, he is considered to be maintaining status, even if his visa is expired. He is only required to obtain a visa if he departs from the U.S. temporarily and thereafter seeks readmission as a nonimmigrant.

Note, however, that automatic visa revalidation is only available where the initial visa has already expired. It is not available where a visa is unexpired but is endorsed for only a limited number of entries.

It is also important to note that automatic visa revalidation applies only to individuals who have visas. Thus Canadian citizens, other than those in E or K status, are never eligible for automatic visa revalidation because there is no visa to revalidate. Similarly, those individuals who used the Visa Waiver Program to enter the United States are ineligible to use this provision.